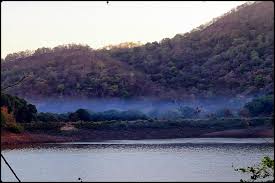 Nalasopara is a suburban city of Thane district and is close to the Deccan lava terrain. It shows hot and humid climate with a moderate seasonal fluctuation in temperature. The city is surrounded by many small hillocks and is elevated about 11 meter from the sea level.

Based in the North-West corner of Mumbai, Nalasopara is surrounded by various hills in East and North-East and plains in West and South-West. The major towns around Nalasopara are, Virar in North and Vasai and Navagahar - Manikpur in South. There are multiple villages surrounding the city. The famous hilly regions are Mandagiri, Asiha and the hills forming the range of Satpura. About 70% of the total area is covered by hills, water bodies and forests and is not available for development. Only 30% of the total area is being used for agricultural, commercial and residential purposes. Paddy cultivation is more common in this region.

Koyana and Ambi are the nearest rivers from Nalasopara and the dams over these rivers have become the tourist attractions. Koyana Dam is the largest hydroelectricity project and plays a dynamic role in flood control during monsoon, making the Koyana River the life line of Maharashtra. The river forms about 50 Km long lake known as Shivajisagar Lake. Panshet Dam is constructed over the Ambi River for irrigation and water supply purposes. The backwater formed from the dam shapes into Panshet Lake. The nearest dam from Nalasopara is Pelhar Dam located at about 9 Km distance from the city and the beautiful and untainted Pelhar Lake lies besides it with having a clean water.

Usually, Nalasopara observes a little hot and humid weather. Summer falls in the city from the month of April to the month of June. From July to August heavy rainfall occurs in Nalasopara. Rainfall in this region ranges from minimum 3 mm as Scotch mist to maximum 533 mm of dense shower. Due to overgrowing population the beauty of the surrounding of Nalasopara is getting tainted. The city is overstraining the natural resources and the result is deforestation, air pollution, soil erosion and desertification. Water pollution has also become a huge problem because of the agricultural pesticides and raw sewage.